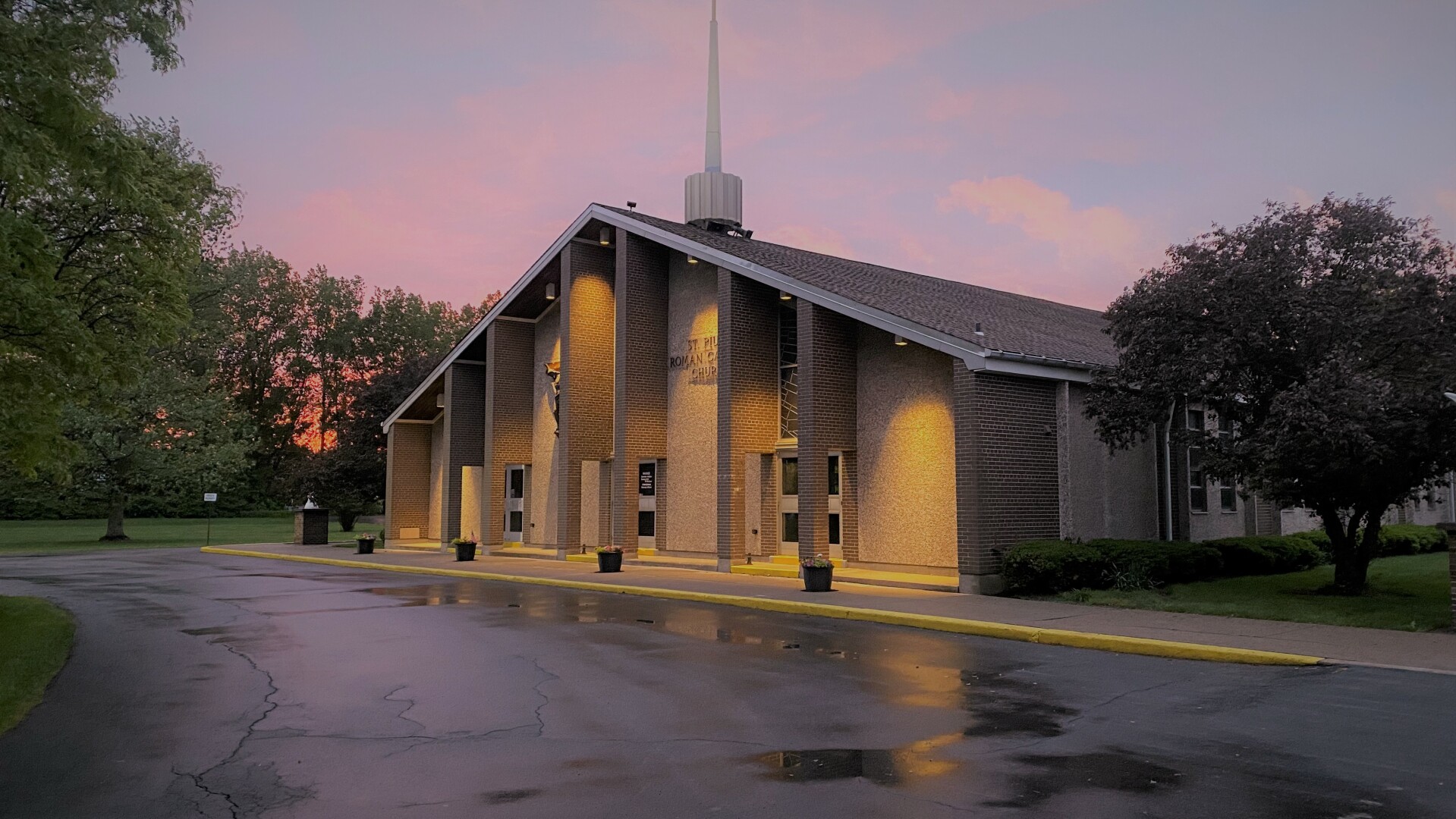 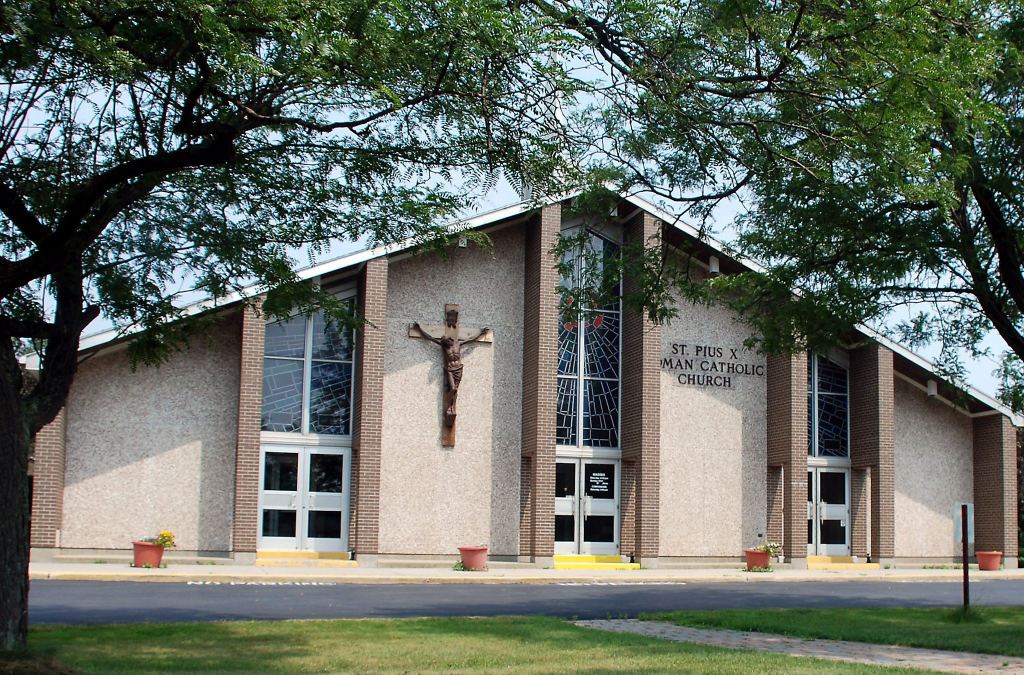 The origins of St. Pius X Church can be traced back as early as 1919, when written correspondence occurred between Bishop William Turner of Buffalo and Mrs. Harinka Monkelbaan, a local resident noting the need for a Catholic parish in Getzville, New York.

It was not until 1958 that St. Pius X Parish in Getzville, NY was established by the Diocese of Buffalo under Bishop James A. McNulty. Fr. Joseph Weber was appointed the first pastor. The first liturgical celebration took place on June 2, 1958 in the Getzville fire Hall which was located at 630 Dodge Rd., Getzville, NY.

Three (3) months later in September 1958, a structure suitable for a parish rectory was purchased and plans were made to build a church and parish hall on the 15-acre property formerly known as Frank Stahl Homestead in Getzville. The Church and other parish properties still exist on this same land today, more than sixty (60) years later.

The first Mass on the site was held on Christmas Eve, December 24, 1959. In the hall, which is now known as the Father Weber Center, housed the temporary church from 1959 until the permanent structure was completed in 1969. The original plans called for the parish hall to be expanded into a school with a convent being built, however those plans were never fulfilled.

In 1964, Fr. Francis Trapp was appointed the second . Under the leadership of Fr. Trapp, the new church was built and Fr. Trapp and his brother, Fr. Donald Trapp concelebrated the first Mass on Thanksgiving Day on November 27, 1969.

In 1977, Fr. Francis Trapp retired and Msgr. James N. Connelly began a ten (10) year assignement as pastor. During his term, an addition was put on the Father Weber Center which would house six (6) additionals classrooms for religious education instruction. Msgr. Connelly retired from the priesthood in 1995 and lived until he was 97 years old, passing away in February 2019.

On May 19, 1987, Msgr. George B. Yiengst was assigned as the fourth (4) pastor. He immediately recognized the need for a new parish office complex and rectory, both were built and completed in May 1990. Those structures remain today and house the current parish rectory, pastoral residence and offices.

On September 11, 2001, our nation faced the worst terrorist attack in history. While others ran away from the horror, first responders ran toward it and many gave their lives  to assist those in need. In dedication to those who sacrificed their lives, a sculpture "First from the Flames" by Timothy P. Schmalz, was erected in front of the church and dedicated on June 4, 2006. The statue depicts four (4) N.Y.C. Firefighters carrying the body of Chaplain Mychal Fallon Judge, OFM who was the first official casualty of the September 11, 2001 attacks.

St. Pius X celebrated its 50th anniversary in 2008 and it had grown to 1,400 families. In addition to the new structures and September 11th memorial, Msgr. Yiengst led various improvements and updates to the parish including the ddition of stained glass windows, carpeting and air conditioning. A year later in 2009, after 21 years of service to St. Pius, Msgr. Yiengst retired.

In 2009, Fr. James O'Connor was assigned as the fifth (5) pastor. In conformity to liturgical norms, he was instrumenetal in refocusing the parish community on the redemptive moment through a new crucifix placed behind altar and the original "Risen Christ" was repositioned above the main doors of the church. Another of his accomplishments was the establishment of the Commitment to Parish Life (CPL) Program. The CPL Program was created to offer parishioners an opportunity to use their time, treasure, and giftedness to allow the parish the opportunity to grow and prosper/ It would also provide the parish with a sustained and predictable level of support. Fr. O'Connor served until his retirement in 2015.

Fr. Jay McGinnis was appointed the sixth (6) pastor of St. Pius X in 2015. Fr. McGinnis initiated the Diocesan "Upon this Rock" Campaign, a capital and endowment campaign to reshape and stregthen the funding of key ministries and programs of the Diocese of Buffalo. Due to the generosity of the parishioners and Fr. McGinnis's dedication and commitment to the Upon this Rock Campaign, he was able to make necessary updates and repairs to the parish. In 2019, due to the COVID-19 pandemic, the parish introduced livestreaming allowing parishioners to participate remotely in Mass and other liturgical services. Fr. Jay retired on August 9, 2020.

Fr. Robert A. Wozniak, former Vice Rector of the Christ the King Seminary, was assigned administrator and the seventh (7) pastor in August 2020. Amid the COVID-19 pandemic and the resulting restrictions and isolation, Fr. Wozniak's primary focus was bringing the parish comminity back together, through faith, spirit, and deed. He set  about invigorating parish organizations, establishing a bereavement ministry, and creating a Parish Pastoral Council setting goals to bring Christ in the lives of the faith community.

As St. Pius X continues it strives to remain faithful to living out its mission, making disciples and bringing about the Kingdom of God in our midst.